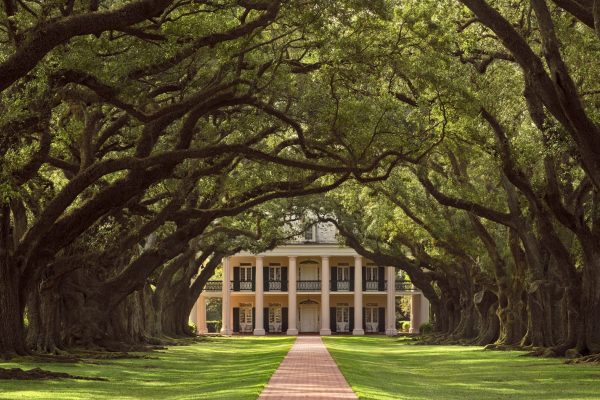 An Antebellum Plantation Just up the river from Laura is the Grande Dame of the Louisiana River Road plantations, Oak Alley. Oak Alley plantation gets its name from the spectacular quarter mile tunnel of 28 oak trees that frame the driveway as you approach. Built in 1839 and facing the Mississippi River, the magnificent entrance to Oak Alley Plantation makes it a Must See destination on everyones list of historic Louisiana sites.

This plantation was originally named Bon Sjour (pleasant sojourn) but became known as Oak Alley when riverboat passengers floating by marveled at the double row of giant oak trees leading to the mansion. Thanks to its classic appearance and beautiful restoration, Oak Alley Plantation has been featured in a number of movies and TV series, including the movie Interview with a Vampire, and Beyonces Deja Vu music video.

During your Plantation Tour, you will hear from expert guides in period dress, as they recount the factual history of the mansion and immerse you in another time. The tour will bring you through several interior rooms of the plantation, as well as upstairs, where you will step outside to take in a breathtaking view of the centuries-old Oak trees and surrounding grounds.

After your tour, we'll give you some time to explore the vast grounds surrounding Oak Alley, which include fascinating exhibits, recreated slave quarters, and of course, countless views of the Oaks themselves that have made this plantation famous. Oak Alley plantation also features a restaurant serving traditional southern fare, ready-made sandwiches and snacks, gift shop, and on-site bar staff ready to whip up a refreshing mint julep.

Get ready for an exciting adventure! Take a thrilling ride through the swamps and bayous of Louisiana, accessible only by airboat.

The Whitney Plantation stands out from other attractions by truly paying homage to the slaves responsible for its existence. Take a guided tour of the home itself (The Big House), Slave Quarters, Wall of Honor memorial, Antioch Baptist Church, and other exhibits carefully built and preserved in the memory of those who lost their lives on the plantation.